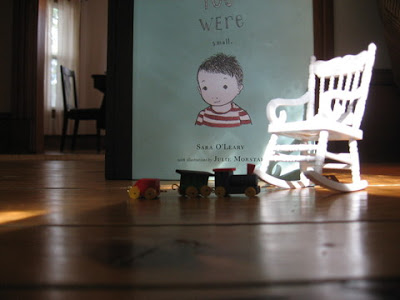 I was interviewed by the wonderful Stephany Aulenback at Crooked House.
She writes:
The other day when I was posting about books featuring little people I forgot all about Sara O'Leary's When You Were Small, a spare, beautifully designed picture book that usually occupies a place of honour on my mantelpiece. When I found it in Munro's Books in Victoria, it made me feel simultaneously delighted and envious. Delighted, because this is the perfect idea for a picture book, perfectly executed. And envious, of course, because, well, why didn't I think of it first?

A boy called Henry asks his father to tell him about when he was small. His father proceeds to narrate a series of tall (small?) tales about the things that happened to Henry back then. Stuff like: "When you were small your mother once lost you in the bottom of her purse. When she found you again, you were clinging to an earring she'd lost three years before." And: "When you were small we used you as a chess piece, because our chess board was missing one of the knights and you were the perfect size."

This sweet, hilarious text is accompanied by pen-and-ink illustrations by Julie Morstad, whose work manages to be charming, surreal, and retro all at once. This book is a work of art, one that deserves to become a bedtime classic.

The very gracious Sara O'Leary has agreed to do an interview about this book and the next one, which is called Where You Came From. Sara says "it is also full of lies."
Posted by Sara O'Leary at Friday, October 26, 2007