"A delightful ode to the imagination," says Georgia Straight

When You Were Small (By Sara O’Leary, with illustrations by Julie Morstad) Sara O’Leary, a books columnist for the Vancouver Sun, has crafted a delightful ode to the imagination with When You Were Small. A father reminisces about his son’s early childhood, and if his son doesn’t remember that “When you were small we used to give you baths in the teapot, and when you were done we could just tip it over and pour you out”, well, what can you expect from kids, anyway? Julie Morstad’s delicate, muted illustrations perfectly complement O’Leary’s whimsy. This handsome title showcases Vancouver’s Simply Read Books doing what it does best: simple story, lush pictures, perfect package. ($19.95) -John Burns, Georgia Straight, April 20, 2006

When You Were Small, by Sara O'Leary, illustrated by Julie Morstad,
Simply Read, 32 pages, $19.95, ages 3 to 6
Small children quite often want to know what they were like when they were even smaller. Small Henry is no exception to this phenomenon, and Henry's dad is more than up to the task of satisfying his son's curiosity. At bedtime each night, father and son sit down opposite each other in wing chairs and Henry asks the question: " 'Dad,' says Henry. 'Tell me about when I was small.' "When Henry was small, his dad tells him, they used him as a chess piece because they were missing one of the knights; they used to give him baths in the teapot -- "when you were done we could just tip it over and pour you out"; he used to sleep in one of his dad's slippers with "a fuzzy wash cloth as a blanket and a tea bag as a pillow"; Henry used a ruler as a toboggan; he was the angel on top of the Christmas tree.
When Dad finishes his litany, Henry asks him if it's all true. " 'Well,' says his dad, 'don't you remember?' " Any imbiber of this delightfully original book will know that it's all true, because there are Julie Morstad's pictures to prove it. And oh how cunningly she goes about providing the proof, using pen and ink and the palest watercolours, aided and abetted by a considerable amount of cross-hatching. There's the little chap in his striped sleeper, fists up, among the chessmen, or perched on the edge of the teapot about to dive into his bath, or lugging a ruler up the hill.

from Quill & Quire, March 2006:
Most children are enchanted by tales of their own antics when they were younger and, and Henry’s no different. In a nightly ritual he asks his father to tell him about when he was small. And every night his father indulges him, recalling how Henry was so small that he bathed in a teapot, wore a thimble for a hat, and slept in a slipper. His father’s fanciful stories leave Henry wondering, "Was all that true?," revealing a child’s need to believe in fantasy, especially if it brings him closer to someone he loves.
In her first picture book for children, Montreal writer Sara O’Leary captures that time in childhood when being small is not so far in the past and imbues it with gentle humour and poignancy. Her descriptions of the small Henry are sweet and imaginative, and the text is inviting and soothingly paced.
All this is ably matched by Vancouver-based Julie Morstad’s illustrations. The delicate lines and softest of colours create a nostalgic ambience, as do the depictions of Henry in slightly short jeans, big sneakers, and a striped tee. Altogether, the design of the book is smooth, balanced (one page text, one page illustration), and appealing. Readers will enjoy the gentle, teasing complicity between father and son as they visit their make-believe memories. This charming book has the added benefit of inviting us to join in the game and remember when we too were small.

OUR SARA IS WINNING HEARTS
If you’ve walked past the Kidsbooks store on West Broadway lately, you may have noticed a window displaying multiple copies of a picture book with a robin’s egg blue cover and Sara O’Leary’s name on it.
The Sun’s literary columnist is the author of When You Were Small (Simply Read Books, 32 pages, $19.95), a sweet new book for preschoolers. In the story a little boy named Henry delights in saying to his dad, "Tell me about when I was small." His father obliges, producing a number of fanciful Tom Thumb scenarios, such as "[w]e used you as a chess piece" and "you wore a thimble for a hat."
Vancouver illustrator Julie Morstad shows how Henry pictures each of these imaginary scenes from his past. Her artwork is delicate and gentle, using crosshatching to great effect. O’Leary is the mother of two sons. There’s a tenderness in the way she shows here how even the littlest people like to contemplate how much they’ve grown and how far they’ve come. So while young readers will doubtless get lost in Morstad’s pictures of Henry the Lilliputian, their parents will tend to muse about the evanescence of childhood - something that books like Robert Munsch’s Love You Forever also make you do.
The book’s publisher - Simply Read books of Vancouver - believes in outstanding graphic design and quality production. Hence the illustrated endpapers, sturdy binding and heavy paper. O’Leary says, "They’ve done such a beautiful job ... that even if they only printed one copy, I could carry it around all my life and die happy."
Phyllis Simon, co-owner of Kidsbooks, says the store’s staff and customers find the style, "both the writing and the illustration, very, very appealing .... It’s got a familiarity about it, but it’s still original." Both parents and school libraries are buying it.
-Rebecca Wigod

EXTRAORDINARY BOY DELIGHTS IN TALL TALES
Nary a person makes it through childhood without, at some point, wondering: What was I like when I was small?
It’s a universal curiousity. And the answers parents give us form the bedrock of family lore. Even when it’s just everyday truth.
So imagine what takes root in a child’s imagination when the answers he gets are out of the ordinary. Henry is such a child. Every night he and his father setlle in their wingback chairs for a chat before bedtime. And every night Henry starts by asking his father to "tell me about when I was small."
His father’s responses provide the stuff that dreams are made of. "When you were small," he begins, "you used to have a pet ant and you would take him for walks on a leash." A full-page illustration facing this fantastical remark shows just that: a wee, tiny Henry with an ant strainign at a leash, moving through a clump of tall grasses and weeds.
And so it goes, from Henry as a small as a chess piece, to someone about to leap into a teapot for his bath, to someone who sits in his shirt pocket.
Montreal author Sara O’Leary’s brief text is perfectly matched by the scratchy line art of Vancouver’s Julie Morstad. Together, they’ll spark any youngster’s imagination. Ages 3 to 6.
-Bernie Goedhart, Montreal Gazette February 25, 2006

(Montreal Books Editor Edie Austin and regular books columnist Bernie Goedhart do a fantastic job of providing coverage for children’s books EVERY week. This is a rarity with newspapers, sadly, and it’s great to see attention being paid to some of our smallest, and most important, readers. SOL)
Posted by Sara O'Leary at Monday, April 10, 2006 No comments:

Included as one of "Carry’s Choices." Carry Dueck is the Manager of the McNally Robinson for Kids in Saskatoon.

Every night at bedtime Henry and his father always have a chat. It always begins the same way. "Dad," says Henry. "Tell me about when I was small." Morstad’s pencil illustrations capture the spirit of imagination as Dad tells Henry, "When you were small we let you sleep in one of my slippers. The left one." Cuddle up with your little one and share this wonderful new picture book. Sara O’Leary is originally from Saskatoon. (All Ages).
- McNally Robinson Newsletter, March 2006
Posted by Sara O'Leary at Monday, April 10, 2006 No comments:

From the Manitoba Library Association:

excerpt:
"Dad," says Henry. "Tell me about when I was small."
"When you were small we put you on the top of the Christmas tree instead of the angel."

When the veil of forgetfulness begins to obscure our memory, we sometimes wonder what our life was like when we were younger. So it is with young Henry, the protagonist of Sara O'Leary's When You Were Small. Henry makes the mistake of asking his playful father to tell about when Henry was small. The father then proceeds to reel off a litany of wildly exaggerated episodes from Henry's early life.

If we are to believe Henry's father, when Henry was small, he was little enough to bathe in a teapot; he was so tiny he was lost in his mother’s purse; he was able to toboggan on a ruler; he even slept in a slipper. Henry may have been small, but this book is big on humour. My own two children enjoyed it immensely. After reading it aloud to them, they immediately wanted me to read it again. My two-year-old laughed out loud several times. Her favourite was the episode when a toothbrush was used to brush Henry’s hair. My six-year-old's favourite part was the use of Henry as a chess piece to replace the missing knight.

Julie Morstad provides the illustrations to accompany O'Leary's concise text. Like the text, there is charm in the illustration's simplicity. It takes talent to make complex things seem simple, and both O'Leary and Morstad succeed in this regard.

Like me, you will enjoy sharing this book with the young readers in your life. This is a fun book that will free the imagination and set you on a path toward thinking of what life might have been like when YOU were small.

- Gregory Bryan, a University of British Columbia PhD student, recently joined the Faculty of Education at the University of Manitoba.
http://www.umanitoba.ca/outreach/cm/vol12/no10/whenyouweresmall.html
Posted by Sara O'Leary at Monday, April 10, 2006 No comments:

A dream of an illustrator ... 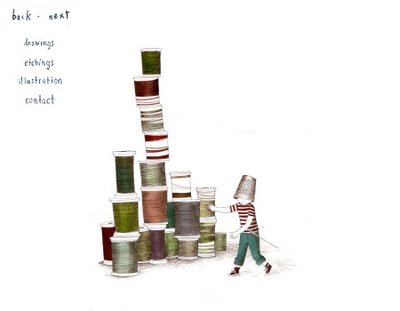 A lovely letter from a bookseller

I love, love, love When You Were Small. I pulled it off the cart this afternoon, admired its spare 60's look and was blown away by its perfection. I can give it no higher praise than putting it in the same league as an early Sendak/Ruth Krauss book. It just the sort of book I loved reading to my own kids. It is pure gold. Its gorgeous illustrations and gentle family humour are going to strike a chord with book buyers everywhere. I will do my best to put it into as many hands as I can in the next two weeks before I move on to my new job. Congratulations to Sara O' Leary, Julie Morstad and Simply Read Books. This book is an absolute gem.
Maggie Blondeau, Vancouver Kidsbooks.

(Thanks, Maggie, I think you're a gem too. Hand-selling has always been a boon to publishers and authors and Kidsbooks has proven themselves champions in this regard. And your reference to Maurice Sendak absolutely tickled me - I was raised on a steady diet of those beautiful books and have done the same with my own boys. Thanks again. SOL)
Posted by Sara O'Leary at Monday, April 10, 2006 No comments: 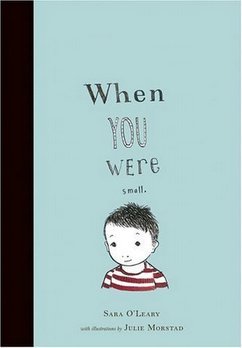 www.simplyreadbooks.com
Posted by Sara O'Leary at Monday, April 10, 2006 No comments: